Brazil is dealing with a severe economic crisis, reports of a surge in birth defects caused by a mosquito-borne virus and efforts to impeach President Dilma Rousseff.

The episode unfolded at a lavish dinner party on Wednesday attended by dozens of senators and Vice President Michel Temer. At one point, José Serra, 73, a senator from São Paulo and a leader of the opposition Social Democracy Party, interrupted a discussion among several senators and Kátia Abreu, 53, the agriculture minister, and told her, “Kátia, they say you’re a woman who likes to date a lot,” using a term that could be roughly translated as “man-eater.”

Brazil won’t have room to cut interest rates next year as inflation remains above the upper limit of the target in spite of a deepening back-to-back recession, according to a central bank survey.

Policy makers will keep the benchmark interest rate on hold at 14.25 percent next year, compared to a forecast of 14.13 percent a week earlier, the median estimate of about 100 economists in a Dec. 4 central bank survey shows. The survey followed indications by policy makers last week that the central bank is ready to boost borrowing costs next year.

“This is the reflection of the minutes that were released last week, which were much more hawkish than the previous minutes,” Edward Glossop, emerging market economist at Capital Economics in London, said by phone. “Policy makers are saying they’ll do what they need to do to get inflation as close to target next year as possible.”

Brazil analysts forecast faster inflation and see less room for cuts in the benchmark rate for 2016, as political turmoil hobbles efforts to fortify fiscal accounts and avoid a second sovereign downgrade to junk.

Brazil’s Selic rate will be 13 percent at the end of next year, according to the Oct. 23 central bank survey of about 100 analysts. That’s up from the previous week’s estimate of 12.75 percent and marks the third straight week the forecast has risen. Inflation next year will reach 6.22 percent, the analysts said, up from 6.12 percent the previous week.

The outlook for faster inflation appears in the first Focus survey since the central bank altered its monetary policy communique to remove language indicating a goal of slowing consumer price increases to target by year-end 2016. Renewed political friction threatening the government’s fiscal adjustment along with the recession has clouded the outlook for the nation’s credit rating, which Standard & Poor’s downgraded to junk in September.

Protesters from a far-left organization that calls for the distribution of farmland to the poor occupied Brazil’s Finance Ministry, forcing the suspension of official business in the building.

The Landless Farmers Movement, also known as MST, was protesting cuts in funding for land distribution to 1.8 billion Brazilian reais ($520 million) from 3.5 billion reais, a spokeswoman for the group said at the site.

A spokesman for the Agrarian Development Ministry, the body in charge of Brazil’s land-distribution program, said that figure referred to the full size of cuts across the ministry, although a good part of it was related to land distribution.

Earlier this week, Deutsche Bank put out an analysis of the most woeful countries. In particular, the write up contained a smart little paragraph on a global powerhouse that used to be a darling of the global economy:

Arthur Okun’s misery index sums unemployment with inflation as a measure of hardship – at least for the man on the street. Suffering politicians, meanwhile, are in serious trouble when they join the so-called Calamitous Club. Membership – reserved for governments whose poll ratings are below their country’s inflation rate – is exclusive. Indeed, until last week only Venezuela’s ruling socialists made the grade. No longer.

The piece was part of a broader note, authored by UK-based managing director Stuart Kirk. Here is where the juicy part begins:

Brazil’s version of the Federal Reserve will almost certainly raise its benchmark Selic interest rate next week for the 16th time in just over two years in a bid to fight escalating inflation.

Trouble is, prices aren’t cooperating. Brazil’s annual inflation rate recently hit 9.25%. That is more than double the official 4.5% target and up substantially from 6.5% in April 2013, when the bank started raising rates.

That double-whammy of high rates and inflation are weighing on Latin America’s largest economy, which is contracting this year.

Another day, another disastrous data point from Brazil. The national statistics office revealed on Tuesday that retail sales fell a seasonally adjusted 0.9 per cent in May from April and by (an unadjusted) 4.5 per cent year on year. 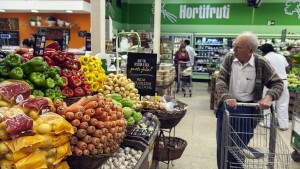 The figures were much worse than expected. A Bloomberg survey had predicted a 0.3 per cent month-on-month contraction in the headline figure. A look into the detail shows the extent to which Brazil’s consumer credit-driven growth model has collapsed.

Brazil’s Central Bank President Alexandre Tombini reiterated that policy makers are committed to the goal of bringing inflation to target at the end of next year.

Policy makers are seeing market expectations converge toward the center of the inflation target of 4.5 percent per year in the “mid- to long-term interval,” Tombini said at an event in Sao Paulo on Wednesday evening. “Our goal is to bring inflation to the center of the target at the end of 2016.”

He added that the central bank’s goal has been to prevent inflationary effects of “relative price realignment in the short term from being transmitted to a longer horizon.”

Central bank head Alexandre Tombini said the monetary authority is committed to bring the country’s rampant inflation down to the official target by the end of next year.

“We are conducting a classic economic adjustment, which is necessary to reduce domestic and external vulnerabilities, put public debt back on a declining path and send inflation back to its target by the end of 2016,” Mr. Tombini said Sunday in a speech during the annual general meeting of the Bank for International Settlements, which took place in Basel, Switzerland.

Brazil’s federal tax revenues fell in May despite this year’s battery of tax hikes, the country’s tax agency said on Thursday, adding to signs of a recession and complicating government efforts to plug a budget gap.

Brazil’s federal government collected 91.5 billion reais ($29.6 billion) in taxes in May, down 4 percent from the same month a year ago when discounted for inflation.