A Brazilian Federal Supreme Court justice has authorized the opening of an investigation into President Dilma Rousseff and her predecessor Luiz Inácio Lula da Silva for allegedly working to obstruct the course of a sweeping corruption probe, GloboNews news channel said on Tuesday.

According to GloboNews, Justice Teori Zavascki’s ruling has given Prosecutor General Rodrigo Janot permission to look for additional evidence that Rousseff sought to name Lula to a cabinet post to help him avoid prosecution. In June, Zavascki barred the use of some wiretaps that showed Rousseff and Lula negotiating the cabinet appointment.

The news channel, without saying how it obtained the information, also said Zavascki authorized the opening of separate investigations against Aloizio Mercadante and Jose Eduardo Cardozo, two former Rousseff ministers, for similar allegations.

Over the past half-century, Brazil’s Banco Nacional de Desenvolvimento Economico e Social (BNDES) built huge power plants and highways through the industrial southeast, aided social programs in the drought-ridden northeast, and helped create some of today’s world-leading companies like airplane-maker Embraer and pulp producer Fibria. More recently, it helped save the Rio Olympics with an emergency loan.

Brazil’s oil company Petrobras will finally get its day in a U.S. court on Sept. 19 in a trial that pits 18 former executives and 13 investment banks, including J.P. Morgan Securities, against U.S. and U.K. investors. Claimants are seeking “tens of billions of dollars” in losses.

The company is the centerpiece in what has become Brazil’s crime of the century. The scandal involving contract rigging, bribery and money laundering recently brought down a sitting president and promises to devour a chunk of Brazil’s career politicians in criminal probes.

“We are seeking multiple tens of billions of dollars,” says lead counsel Jeremy Lieberman of Pomerantz, the New York law firm leading the charge against Petrobras. “Not only are we challenging company statements on how it engaged in this bribery scheme and inflated its assets, we are saying that Petrobras’ claim that it lost about $2.5 billion to fraud is wrong. It’s a whole lot more than that.”

Ronald Reagan was famously called “the Teflon president” for his ability to deflect scandals that might have sunk his popularity. So why couldn’t Brazilian President Dilma Rousseff tap into this same protection?

Following the lower house’s overwhelming vote on April 17 to impeach Rousseff, Brazil’s government sits on the brink of collapse. An onslaught of corruption charges against the president and her Workers Party (PT) has emboldened her political opponents. In response to allegations of an elaborate kickback scheme that funneled bribes to politicians via the state-run oil firm, Petrobras, Brazil’s elites — including the government’s largest coalition partner, the Brazilian Democratic Movement Party (PMDB) — and the public have abandoned Rousseff’s government. Her approval stands at a historically low 9 to 10 percent.

Media coverage of these scandals has been scathing and unrelenting. Yet high-level corruption is hardly new in Brazil. In fact, Rousseff’s predecessor and mentor, Luiz Inácio “Lula” da Silva, also from the PT, was himself at the center of several scandals. In 2005, the expansive mensalão investigation of PT payoffs for legislative support threatened to derail his bid for reelection. And yet Lula proved to be a Teflon president and cruised to an easy victory in 2006 — and then helped his chosen successor win the presidency in 2010.

Not too long ago, Brazilians might have been counted as the most optimistic people in the world. From 2008 to 2013, as the United States and Europe grappled with the aftermath of a crisis wrought by blind trust in unfettered finance, Brazil’s income per person grew 12 percent after inflation. Wages soared. The poverty rate plummeted. Even income inequality narrowed.

Brazil remained only a high-middle-income country, in the technospeak of the International Monetary Fund. But for the first time in forever, the eternal “country of tomorrow,” as Brazilians often ruefully described their nation, saw itself instead as a rampant member of the emerging cohort ofBRICS (Brazil, Russia, India, China and South Africa) — maybe even closer than China to making the jump into the ranks of the world’s richest nations.

And then it didn’t happen. 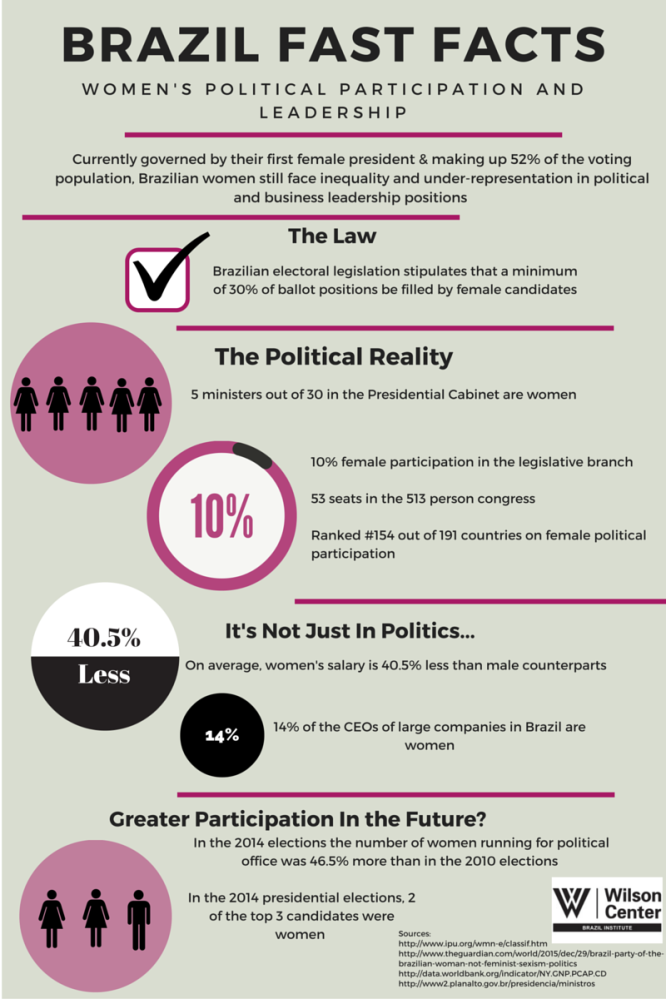 On Sunday, Brazil’s lower house (the Chamber of Deputies) voted to proceed with impeachment hearings against Dilma Rousseff, the nation’s first female president, by an overwhelming 2:1 majority. The case now moves to the Senate, which is expected to vote on Rousseff’s ouster by May 17. Much like in the U.S., both houses are overwhelmingly male. And just like in the U.S., the treatment of the country’s most prominent female politician is largely a function of sexism.

The stated reason for Rousseff’s impeachment is her alleged misappropriation of funds in an effort to cover budget gaps and boost confidence in the economy (and her administration). The accusations come from a sweeping anti-corruption campaign, Operação Lava Jato (Operation Car Wash), that has uncovered a dizzying array of malfeasance at nearly every level of government.

So the proceedings against Rousseff might not seem so remarkable, if not for the mind-blowing contradictions involved. Brazil’s previous two presidents, Fernando Henrique Cardoso and Rousseff’s mentor, Luiz Inácio Lula da Silva, both faced numerous similar — in some cases, more serious — charges (17 counts against Cardoso, 34 for Silva), none of which prompted impeachment hearings.

In a 50-page report citing wiretapped conversations and other evidence, Attorney General Rodrigo Janot said there are “enough elements to conclude” that Ms. Rousseff had named Mr. da Silva as her chief of staff to shield him from possible arrest related to his alleged involvement in a massive corruption scandal.

RIO DE JANEIRO — His manners and dress are so impeccable that the man who may soon be Brazil’s next president is quietly known by political allies and enemies alike as “The Butler.”

Yet Vice President Michel Temer, a respected constitutional scholar who would step into the presidency should President Dilma Rousseff be impeached in coming weeks, is not quite what you might expect.

Married to a former beauty pageant contestant 43 years his junior who has his name tattooed on her neck, Temer has also released a book of poetry titled “Anonymous Intimacy.”

RIO DE JANEIRO — A new poll published Sunday suggested strong support for the impeachment of embattled Brazilian President Dilma Rousseff in a politically polarized country mired in an economic recession and a corruption probe that has ensnared much of the county’s political brass.

The poll by the respected Datafolha agency, published in the Folha de S. Paulo newspaper, said 68 percent of people surveyed want to see lawmakers vote to impeach Rousseff. That’s up 8 percentage points since February, with the jump was highest among the rich, who supported Rousseff’s impeachment by 74 percent.

Tens of thousands of Brazilians took to the streets on Wednesday to protest against the government, as a gathering corruption scandal threatened to engulf the president and her predecessor.

Earlier Dilma Rousseff appointed Luiz Inácio “Lula” da Silva as her chief of staff, in what was widely seen by her critics as an attempt to shield him from prosecution over alleged corruption and money-laundering. Under Brazilian law, only the supreme court can authorise the investigation, imprisonment and trial of cabinet members.

Hours after Lula’s appointment, a judge investigating a corruption scandal at the state-run oil company Petrobras released a number of secretly taped phone calls between Lula and Rousseff, which appeared to suggest that the job offer had indeed been made to protect the former president.