With its concrete beds and squat toilets, the Complexo Médico-Penal is probably not where Brazil’s top construction and oil executives had pictured spending their retirement.

Normally reserved for mentally ill prisoners, the prison lies at the end of a potholed road on the banks of the Iraí reservoir in the southern state of Paraná. From the outside, a dilapidated brick archway at CMP’s entrance gives it the appearance of a rundown farm. However, an aerial view reveals its sinister layout, with the cells arranged in the shape of a giant machine gun.

For most of the past year, it has been home to Marcelo Odebrecht, head of Latin America’s largest construction group; João Vaccari Neto, former treasurer of the leftwing Workers’ party, Brazil’s largest political party, and other suspected ringleaders of the vast corruption scandal at Petrobras, the oil company.

Brazilian Senator Delcidio do Amaral, arrested in November on charges of obstructing a corruption investigation, has left prison after a Supreme Court judge ordered his release.

It is unclear if Mr Amaral, who denies the charges, agreed to a plea bargain to testify against other suspects.

He will be allowed to resume his duties in the Senate while Congress assesses impeachment proceedings against him.

Brazil’s Petrobras may need to pay record penalties of $1.6 billion or more to settle U.S. criminal and civil probes into its role in a corruption scandal, a person recently briefed by the company’s legal advisors told Reuters.

State-run Petroleo Brasileiro SA, as the company is formally known, expects to face the largest penalties ever levied by U.S. authorities in a corporate corruption investigation, according to the person, who has direct knowledge of the company’s thinking. The settlement process could take two to three years, this person said.

To date, the largest settlement of corporate corruption charges with the U.S. Department of Justice and the U.S. Securities and Exchange Commission was a 2008 agreement with Siemens AG, the German industrial giant. It agreed to pay the United States $800 million to settle charges related to its role in a bribery scheme, and paid about the same amount to German authorities.

A plunge in the Ibovespa from this year’s peak put the equity gauge on the brink of a bear market amid forecasts Latin America’s largest economy is headed toward the longest recession since the 1930s.

The stock benchmark extended its slump since May 5 to almost 20 percent as lender Itau Unibanco Holding SA and oil producer Petroleo Brasileiro SA tumbled. Traders have been pulling money from Brazil on concern President Dilma Rousseff will struggle to revive the economy, curb inflation and narrow the budget deficit amid a political crisis. The real posted the second-biggest decline among 16 global major currencies.

Investors are turning bearish as the central bank has signaled it will hold interest rates at a nine-year high even in the face of a recession. Rising borrowing costs are slowing down consumer purchases, pushing Rousseff’s approval rating to record lows and dimming prospects for corporate earnings. To make matters worse, emerging markets have joined a selloff in commodities since China’s yuan devaluation last week.

Santos Port has always been known as Brazil’s gateway to the world. Now, it’s also a window into what went wrong in Latin America’s biggest economy.

Exports from Santos have tumbled as demand from China sags. Companies betting on a boon as massive offshore oil finds were developed are now scaling back after Petroleo Brasileiro SA said it will cut investments by a third. And real-estate prices are falling as entire buildings stand vacant.

Nowhere, perhaps, are Brazil’s unfulfilled promises as an almost superpower more apparent than Santos, Latin America’s busiest port. About an hour outside of Sao Paulo, Santos benefited from the dual boon of the commodities supercycle and the government spending spree it afforded. Now, it’s feeling the double blow of a corruption scandal at Petrobras and Brazil’s worst recession in a quarter century. 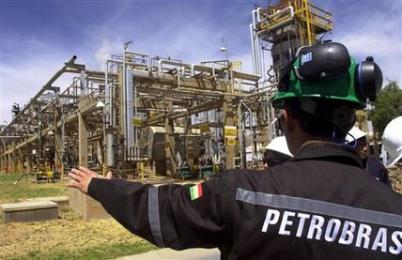 The bonds were sold at a rate of 8.45% and attracted about $13 billion in orders from investors, according to an investor tracking the sale. In comparison, a 30-year U.S. Treasury bond yields 2.94%, and a Mexican government bond that matures in 2110 recently traded at a yield of 5.52%, according to FactSet.

Brazilian state-run oil company Petroleo Brasileiro SA, or Petrobras, unveiled details of its debentures issue on the local debt market, which could total up to 4.05 billion reais ($1.28 billion).

The company said that the debentures of the first and second series will pay an annual yield of up to 2.15 percentage points over the interbank rate, called DI, which is 11.4% a year.

For Brazil’s economists, 2015 will certainly be a year to forget. Latin America’s biggest economy is expected to contract by more than 1 per cent this year, marking the country’s worst recession in 25 years.

Meanwhile, inflation is set to end the year above 8 per cent, breaking the target range for the first time since 2003.

To add to the country’s woes, the corruption scandal at state-controlled oil company Petrobras — believed to be the biggest of its kind in Brazilian history — has the potential to slow growth further and accelerate job losses.

Luciana Magalhaes and Will Connors – The Wall Street Journal, 5/11/2015

When asked by lawmakers Monday if Ms. Rousseff and Mr. Lula da Silva, along with other top government officials, knew of the alleged scheme, Mr. Youssef said, “It is my understanding that [they] knew everything.”

In a world of near-zero interest rates, how about this? Last week, Brazil’s central bank increased its main interest rate to 13.25 per cent. The 50 basis-point rise is part of Brazil’s efforts to put its house in order. The economy is expected to shrink by 1 per cent this year, the deepest recession in 25 years; unemployment is rising; while inflation is running at over 8 per cent — almost twice the official target, hence the rate rise. After years of fast growth and easy credit, Brazil is on its back.

Latin America’s biggest economy is also reeling from a corruption scandal at Petrobras, believed to be the largest in national history. Release of the state-controlled energy company’s long-delayed results last month estimated losses, due to corruption, of more than $2bn — much of them due to political kickbacks. Combined with the recession, this has savaged President Dilma Rousseff’s standing. Even in a region of weak leaders, her dismal approval rating stands out. At 13 per cent, it is lower even than that of Nicolás Maduro, the president of Venezuela.

There are three main reasons for Brazil’s gloom. China’s slowing economy has punctured the commodity price boom forcing Brazil, and other commodity countries in the region, to tighten their belts. The prospect of higher US interest rates threatens to suck international liquidity out of the country. Most of all, it is paying the cost of Ms Rousseff’s mistaken faith during her first term in so-called “developmentalism”.